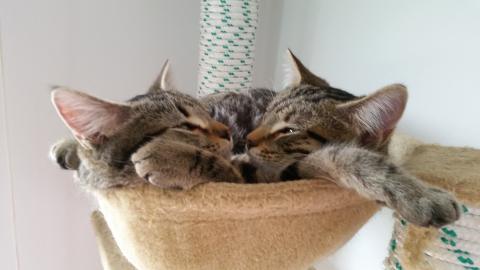 Its 7:50pm and my amazingly kind and wonderful assistant has just said goodbye and goodnight. She’s just helped me to squeeze two van’s worth of household items in to one van, like a crazy game of packing-tetris. Lawnmowers, office chairs, boxes of cushions, fake plants and fertiliser all pieced together perfectly, and completely randomly, like a typical Aldi shopping isle.

Once she’d driven off I sit in her hubby’s van kindly lent to me and listened to the rain pelting down on the roof. I’m leaving my Diamond Creek house for the last time. The rain is muffled by the meowing in the back and hissing from the front seat. Remind me whose stupid idea it was to adopt 3 rescue cats again? My older, grumpier cat is looking out the front of his carrier like he’s planning to kill me in my sleep. Because I think I’m MacGyver and stubbornly refused to buy two more cat-carriers for the others, I’d fashioned a double-up cat carrying facility from our old aquarium box. The first attempt to get my two Bengal-cross kitlets in to the box had been a disaster; the breathing holes I’d cut for them were way too big and they’d escaped within seconds. I also couldn’t hold on to them because I’d forgotten to put on my heavy duty scratch-resistant gloves, and they know just how to ruin my career with those razor-sharp claws. After sticking more duct tape across said holes and making them more like medieval archery slits, I managed to keep them in the box long enough to get it in the back of the van. Just.

Adding to the noise is my stomach, reminding me what time it is. I encourage people every day to live a healthier lifestyle, and practice self-care….so how many 10pm dinner trips to McDonald’s can I get away with before anyone finds out? I justify that it’s way too late for me to cook something skinny people eat by the time I reach my new place in Yea, so GET IN MAH BELLY.

After I inhale the fatty burger of goodness I start the long drive to Yea. Have you guys been to Yea? It’s AWESOME. The people who live here are the most welcoming, warmest and genuine people you’ll ever meet. They live in a town where the name heralds a celebration, so how could it not be fantastic. Yay! It’s like living in a place called Amazeballs.

However, the drive there can be arduous AF. If you drive through Whittlesea and Kinglake West – which I’d highly recommend unless you want to see your life flash before your eyes on the C746 – you’ll meet a variety of challenges on the road. Curtains of thick fog, walls of rain, trees down, strong winds…and that’s before you start on the wildlife. Kangaroos are like cow-sized Tiggers, wombats are indignant boulders, indecisive possums, and wild deer which stand in front of your car looking as if to say “YOU move”. In summer there’s giant moths that make you wonder whether you’ve driven in to the psycho’s house in Silence of the Lambs. But you just slow down, put those whistly things on your car grill to scare away the bigger animals, and admire the sun setting over the spectacular scenery around you. But, not tonight. This was going to be a tough drive.

Thankfully because of the abysmal weather there were hardly any other people on the roads, else they would have had to contend with being stuck behind a little van doing barely over 60km per hour with a crazy woman shouting behind the wheel. But I finally made it to my new rental property and realised that the meowing, whilst having gotten louder travelling through the forest, had now finally stopped. I turned the engine off, congratulated myself on making it alive, and took a deep breath. We all know that moment of dread and exhaustion before the unpacking starts.

I go inside and turn on all the lights. The cats would have to be quarantined before I did anything else, so I carefully chose a room with walls that could be hosed down. It could have been the fatigue but I imagined them lined up in the back as I opened the van, pointing machine guns at me like something out of a Rambo movie. It’s PAYBACK TIME. Gandalf, the oldest, had a tiny cigarette hanging from his mouth and war paint smeared across his whiskers. This scenario did not eventuate however, and I was now confronted with the opposite problem, which was finding said cats.

The torch on my phone helped to illuminate the crime scene in front of me and light the way through the rain. My makeshift cat carrier had been completely destroyed and a trail of debris followed the trail of the little Houdini wannabes. As a mark of indignation, *someone* had pooed their pants all over the aquarium box, several crates of brainy books (the ones you put somewhere obvious in your house that make you look smart), my clothes, and finally smeared up the side of the suitcase they now sat atop. The trail down the opposite side was a waterfall of yellow liquid sprayed all over my shoes, pot plants and dumb books. So I guess no one needs the kitty litter now then aye.

So this story has nothing to do with massage, except that I DESPERATELY needed one afterwards. One of the best lessons I learnt from this tough time, accumulating in cat excrement, is to just take one step at a time. Don’t try to eat the whole elephant, just one bite then another. Yes it was 1:30am when I finished, but I got all the unpacking done. Sometimes life puts us in really difficult situations, and you just need to get through the next 5 minutes. It’s okay, because whether we like it or not this too shall pass.

And if you want a quiet life, just don’t adopt Bengal kittens.

The three best things about Sports Massage
What does indulgence mean to you?
Self-care on planet bonkers
5 Foods to boost your immunity
Chinese medicine and inflammation